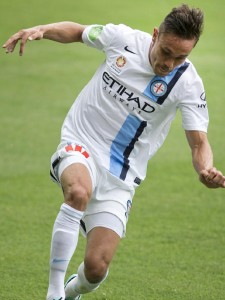 JAMES Brown is confident his new club Nunawading City can shake its reputation as National Premier League easybeats and climb the NPL2 East table in 2017.

Nunawading has won just two of its 56 matches since being admitted to the NPL in 2015 and finished last season with a staggering goal difference of minus 92.

But Brown, who played 72 A-League matches during stints with Gold Coast United, Newcastle Jets and Melbourne City, said his first impressions of the club had been positive.

“When I sat down with the staff at Nunawading, some of the stuff they had to say was really impressive about the type of football they want to play,” Brown said.

“I think the culture they are building there is something I want to be a part of.”

The 26-year-old’s signing is a significant coup for Nunawading City ahead of the first season NPL2 clubs will face the threat of relegation back to State League 1.

“I want to help the young boys get to the next level,” Brown said.

“There’s plenty of talent getting around, I want to bring the experience I have built over the last few years playing and help the boys take their game to the next level.”

Brown is no stranger to the NPL and played five matches for top-flight club Avondale FC last year.

“From the signings that we have brought in so far, we have been ambitious,” he said.

“Hopefully the results will follow because from what I have seen at training there’s a few good players there and I think we should surprise a few people this season.”

Brown is not the only former A-League player who has been linked with a move to Mahoneys Reserve.

Speculation has been rife ex-Western Sydney Wanderers and Melbourne City midfielder Jason Trifiro with also ink a deal with the club.

Nunawading has lost exciting striker Emile Damey, who moved to Manchester 62 in Gibraltar before being sent on loan to Kuwaiti club Burgan SC.